Causal Networks and Contagion in Forex

We recently added a new dashboard to FNA’s G20 Monitor platform to show how different currencies interact among each other. The key questions this dashboard aims to answer is how contagion spreads on the Forex Market and what currencies are at highest risk of contagion at any given time. The theory behind this dashboard is based on my research as a PhD student at the Swiss Finance Institute.

Market risk is usually analysed by creating correlation networks derived from asset prices, as described in the book ‘Network Theory and Financial Risk’ by Soramaki and Cook (2016). Instead of correlation, in this case we have based our networks on a new measure for the contagion and added direction to the interactions between assets through causal inference. This approach will allow us to pinpoint sources of contagion and which currencies offer strong diversification and which are more at risk of contagion, i.e., systemic risk.

The following figure shows a snapshot of such a network during the early 2000s for the major 23 currencies as selected by the Federal Reserve: 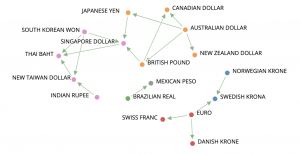 In this network the nodes represent the currencies and the links show the causal effects of contagion from one currency to the other. The different colours of the nodes show what community each currency belongs to, based on a clustering algorithm.

The network shows simple connections, like the Euro (EUR) having an impact on the Danish Krone (DKK) exchange rate, and whole contagion paths, like the one starting from the British Pound (GBP) to the Singapore Dollar (SGD) and ending with an effect on the Thai Baht (THB).

Most articles in this field find 4 main communities on the Forex market: the European cluster, the English language cluster (sometimes referred to as the Colonial cluster, that includes mainly the Australian, Canadian, New Zealand Dollar and the South African Rand), the Emerging Economies (like the Brazilian Real and the Mexican Peso) cluster and finally the Asian currencies cluster (Wang et al., 2012; Keskin et al., 2011; Kwapien ́ et al., 2009; Wang et al., 2014). While we often see similar results in the contagion networks, what is even more interesting is looking at the changes within these communities over time. The dashboard allows you to scroll through over 20 years of data and what becomes obvious immediately, is that the number of clusters and the list of currencies allocated to each cluster changes over time in reaction to economical events. A fitting example is the recent Covid Recession. The following map taken from the dashboard shows the contagion clustering for the initial phase of the Covid Pandemic back in 2020:

Contagion shown on a world map – where countries have different colour according to the community they belong to. 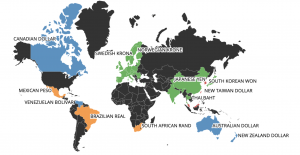 The map shows one big cluster of Europe, China and India – something that has never appeared during the previous 20 years. The clusters became denser, and the market contagion skyrocketed to levels we last saw during the Sovereign Debt Crisis. All these changes we see on the Forex happened while the markets were in free fall: during this period the S&P 500 fell by 34% within a month, the fastest fall in market history to date (Roubini 2020).

With the causal networks we can establish where the currency of interest is positioned and, from a systemic risk point of view, where the contagion effect could come from. You can view the dashboard at g20monitor.com, where you can sign up for a free account.

Why should commercial banks simulate the economic impact of retail CBDCs?

by Dr Carlos León and José Fernando Moreno Gutiérrez Central bank digital currencies (CBDCs) and other forms of digital money are here to stay. As intermediaries in the funding and payments ecosystems, commercial banks will see their business-as-usual activities affected. Commercial banks need quantitative insights into how they will be affected to thrive in this […]
20 Jul 22

Q&A: FNA’s Carlos León on how digital money can be more efficient and safe

Why should commercial banks simulate the economic impact of retail CBDCs?
Read more >