Trophic Analysis: Applying the Idea of Food Chains to Financial and Economic data

The latest dashboard on FNA’s G20 Monitor applies the notion of trophic analysis to financial and economic networks.  With the tool, financial institutions can better understand their position and functionality within the networks and shed light on policy and regulation problems.

In this blog, FNA Data Analyst Intern, Yijie Zhou, explores how trophic analysis, an idea originating from food webs, applies to finance and economics and what we’ve learnt from the findings.

Different animals or organisms each have their unique position and importance in an ecosystem. The complex interactions between each item in an ecosystem form a food can be decomposed into different layers using a measure called trophic levels. We illustrate this briefly in Figure 1.

Here, each layer has its own functionality, from microorganisms to herbivores, to apex predators, with the food web showing the flow of nutrition and energy between species. 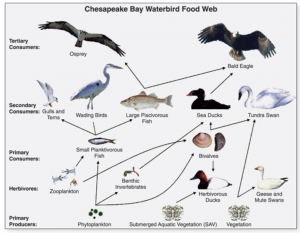 We applied a newly improved version of the trophic level (Mackay et al, 2020) and its relative concepts of trophic incoherence to investigate the production network. The production network, constructed using the publicly available dataset – World input-output dataset. The dataset provides information on transactions of monetary goods between 56 sectors in 43 countries. We show an example of trophic analysis on the production network of the USA in 2013.  For visualization purposes, we apply filters to nodes and highlight the largest 20 nodes.

Figure 2 adopts a trophic layout where the y axis shows the trophic levels we compute for each node and x axis represents the output of spring-electrical model which makes sure each node maintains a suitable distance from each other.

A directed link in the graph indicates a flow of monetary goods from the supplier (seller) to the consumer (buyer). Figure 2 shows two heavy links indicating a large number of transactions between mining and the manufacture of coke and petroleum products and  between crop/animal production and Manufacture of foods. We have filtered links with small transaction amounts to provide a clearer visualization.

The node size demonstrates the value of PageRank (Page et.al, 1999) a well known centrality measure indicating the importance of individual nodes.  From the figure, the trophic levels and Pagerank tells a different story. Nodes like Retail trade have a high trophic level but not necessarily have a high PageRank value. While centrality measures focus more on the node importance from the connection perspective, trophic levels focus more on the position of the nodes in the overall direction flow.

The node colours represent the four categories of classification of the economy sector. In the example of the USA production network, we have primary sectors like ‘Mining and quarrying‘ in the bottom of the trophic structure having the lowest trophic levels. In the middle, secondary and tertiary sectors are mixed as they are the main consumers of primary sectors and also important suppliers of quaternary sectors like ‘Healthcare’ and ‘Public defence’.

Trophic levels are node level statistics, but we can also use it to compute the trophic incoherence, a network-level measure, capturing the cycles within the graph  (0 means the graph does not have cycles and 1 means all pairs of nodes connected). The trophic incoherence of the production network in Figure 2 is 0.78 meaning that there are many feedforward and feedback loops in it.

We can further adjust the scale of our analysis and look into a group of countries. We compare the 2014 trophic structure of USA-KOR-CHINA and 5 EU countries (before Brexit) in Figure 3. Here, we observe that EU countries are more clustered and united compared to the US-Asia relationship, implying that international transactions in the EU are more frequent between countries as well as related sectors than those of USA-CHINA-KOR. Moreover, we also see from the figure that China and the USA are located at the top-side of the layout, highlighting their role as consumers in the regional production network.

With the trophic layout and results of trophic analysis, we can better understand the hierarchy of the production network and the overall directional flow of the monetary goods in a given economy. This could also shed light on the study of shock propagation along the supply chain and the integration of regional economic systems.  In the context of financial networks, trophic analysis has already been used to study systemic risk (Sansom et al 2020).  This new dashboard is now available within the FNA G20 Monitor.

(2)  http://www.wiod.org/home. Note that we only use the square production matrix and we do not take into account the information about final demands of households and governments.

CBDC Motivations, Challenges and Design Choices- A perspective from Latin America   Wednesday 18th May 2022, 14:00 (BST) There are many motivations for rolling out a CBDC, from achieving higher financial inclusion and higher transactional efficiency to preserving monetary sovereignty by compensating for the declining use of cash and by countering the entrance of new […]
11 May 22

About the series   The payments and FMI landscape are rapidly evolving as new technologies, digital currencies, and disrupters emerge. FMIs and their members must understand the impact of these changes to safely ensure financial and economic stability. Following on from the success of FNA’s monthly CBDC Broadcast, The FMI Broadcast will follow a similar […]
04 May 22

UK Finance quantifies potential improvements to liquidity and risk reduction in the CHAPS payment system through FNA’s payment optimization and simulation technology.   Introduction   The Clearing House Automated Payments System (CHAPS) is one of the largest high-value payment systems in the world, processing an average daily value of over £360 billion. Clearing participants, such […]
Subscribe to our newsletter:
Copyright FNA © 2022 | Privacy Policy