Today, 87 central banks are currently looking to introduce digital currencies in the near future, however the impacts of CBDCs are still relatively unknown.

Many questions frequently cross the minds of regulators, banks and payment companies worldwide. What impact will introducing a CBDC have on the financial and economic system? Can CBDC’s be configured without largely impacting the banking sector balance sheet? Could card companies suffer a substantial decline in their transaction revenues?

FNA’s CBDC Simulation aims to answer these concerns. By creating an accurate, virtual model of a Central Bank’s payment system, we enable regulators and financial system participants to examine the impact of introducing a CBDC by testing and simulating different scenarios.

The FNA CBDC simulation model and some of its results are described in a research paper authored by Ramadiah, Galbiati and Soramäki (2021). In the paper, they proposed a multi-period agent-based model for the study of macro-financial effects related to the introduction of a retail Central Bank Digital Currency (CBDC): a general purpose and non-interest-bearing central bank liability, which competes with cash and card as a means of payments. They see this model as a framework that can be enriched and tuned to answer a myriad of questions relevant to different jurisdictions from a macro-financial angle.

The model features 4 classes of agents, namely consumers, merchants, a commercial bank and a central bank, who interact in time according to defined rules (see Fig 1 for the illustration of the model dynamics).

Fig 1. Illustration of the Model Dynamics.

Calibrating it with aggregate statistics of the German retail payment market, Ramadiah, Galbiati and Soramäki exemplified how the model can be used to quantify the impact of a CBDC on:

The research shows that the adoption of CBDCs led to the decline of cash and card payments up to approximately 30%. (see right panel in Fig 2). To put this finding into perspective, the latter indicates that card companies would lose approximately EUR 1.5 billion transaction revenues in the German domestic payments market. 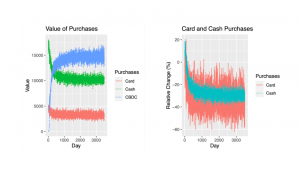 Furthermore, they looked at the impact on the banking disintermediation and balance sheet (Fig 3). They found that the total value of CBDCs in circulation is 2.8% of the total deposits, which corresponds to EUR 75.04 billion of the total deposits in the German banking system. They also found that, following the introduction of the CBDC, the growth rate of the bank deposits would decline by 0.75% in 20 days due. This number corresponds to the fall of approximately EUR 20 billion for the German banking market. 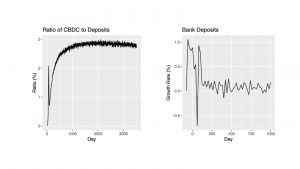 Fig 3. Banking sector disintermediation. Left: the ratio of the total value of the CBDC to deposits. Right: the growth rate of bank deposits over the previous 20 days. The CBDC is introduced to the system at t = 0, and is fully adopted by all consumers and merchants at t = 75.

Overall, Ramadiah, Galbiati and Soramaki found that CBDCs can be configured without largely impacting the banking sector balance sheet, though card companies may suffer a substantial decline in their transaction revenues.

The model is publicly available in the FNA simulation platform for running other policy experiments i.e., testing the efficacy of alternative configurations of CBDCs.

By adding a richer variety of consumers and more articulated bank behaviour, the model could be extended to explore issues related to financial inclusion and financial stability. Moreover, small changes to the model could allow for an interest-bearing CBDC competing with deposits and other assets as a store of value; and similarly, for other payment instruments such as electronic money and stable coins.

Fnality International partnered with FNA to help design their new payment system and quantify the benefits for their participants by means of simulation.   Introduction   Financial markets face unprecedented challenges. These challenges include fragmented and inefficient post-trade processes, liquidity constraints and complex and costly risk management. To address these challenges, Fnality is developing a […]
18 Jan 22

The CBDC Broadcast: Rewind   Catch up on FNA’s new 60-minute webinar, The CBDC Broadcast, hosted by Will Towning. The webinar covers the latest CBDC-related news and events and features input from the brightest minds in the industry to provide a clear and concise overview of the latest developments in the world of CBDCs.  Catch up […]
18 Jan 22

Episode #1: Quantifying the Impact of CBDCs   How can central banks, commercial banks and other organisations use simulation technology to understand the impacts of introducing a CBDC? Dr Kimmo Soramäki and Dr Carlos León explore how financial organisations can benefit from simulations and introduce FNA’s CBDC Simulator. Watch the webinar recording now.
Subscribe to our newsletter:
Copyright FNA © 2022 | Privacy Policy